Slow down and admire the beauty of the jungle and its inhabitants.

The Sulawesi Lowland Rain Forests harbor some of the most unique animals on Earth. The islands are located in the region known as Wallacea, which contains a distinctive fauna representing a mix of Asian and Australasian species. Sulawesi jungle is a perfect place for animal watching.

During our trek some endemic fauna of Sulawesi can be encountered such as Macrocephalon maleo, tarsius, Bubalus depressicornis (anoa), black macaque, Babyrousa celebensis, Strigocuscus celebensis (cuscus) and Sulawesi hornbill and many other species of birds. Some species can only be seen during night watch.

(a large megapode – a bird that passively incubate eggs) It is found in the tropical lowland and hill forests but lays its huge eggs in the open sandy areas, volcanic soils or beaches that are heated by the sun or volcanic springs. 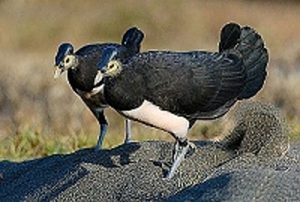 (a tiny nocturnal primate) With its body size it belongs to smallest primates of the world. It has extremely big head in comparisons with body. Its enormously huge eyes are fixed in the skull and weight together more than brain of this animals. Such big eyes are necessary for its nocturnal life. Perfect vision is extremely important for this animal. 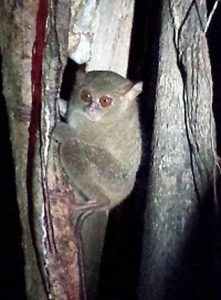 (a fruit eating hairless pig with huge tusks) Its name is transcription of its local name babi (pig) and rusa (deer) so it is also called pig-deer. The remarkable “prehistoric” appearance of this mammal is largely due to the prominent upwards incurving canin teeth of the males, which actually pierce the flesh in the snout. If a babirusa does not grind its tusks (achievable through regular activity), they can eventually keep growing so as to penetrate the animal’s own skull. Some of them are living in the protected forests and some of them in the thick forests.

(also known as dwarf buffalo and sapiutan) This animal is the king of the jungle in Sulawesi and is scared of human beings and other wild animals. These animals have territorial areas and are always in a couple. Anoa is herbivore and is essentially miniature water buffalo with similar appearance to a deer. They are easy to be found between south and central Sulawesi.

(a diminutive, possum like marsupial) The small Sulawesi cuscus has soft, pale buff fur, a short face, with protruding eyes and a naked nose. The feet have five digits, all of which are strongly clawed, except for the big toes of the hind feet. The un-clawed big toes are opposable to the remaining toes of the hind feet, as are the first two toes of the forefeet to the other three. This enables the cuscus to firmly grip. 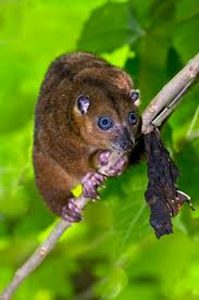 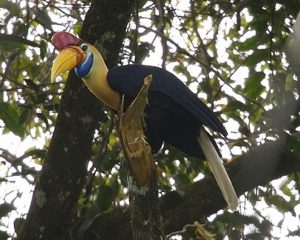 We booked three days with Budi. Two days in the jungle and one day we visited a burial in Toraja. Budi is a very experienced guy. It feels that he really grew up in the jungle. He knows probably everything to survive. He told us about the medical use of plants, showed us animals and he tought us how to build shelters from the meterial we found in the woods. Really, really nice experience. I will remember for a lifetime. Thanks Budi!

I took 3 days trip around Toraja with guide Budi. I had two days of Regular tour and one day of Soft trekking. It was really great experience. I learned so much information about the culture of Toraja from Budi…

We just came back from a wonderful 2-days-trek around Tana Toraja. We were lucky to have a great guide Budi. The landscape was truly beautiful and our guide “Budi” was the best guide you could wish for. He was very friendly, reliable and careful. He knew a lot about the flora and fauna, showed us loads of medicine plants and pointed out interesting things. As he shares the animistic belief of his ancestors he could tell us a lot about traditions and religious beliefs in Tana Toraja.